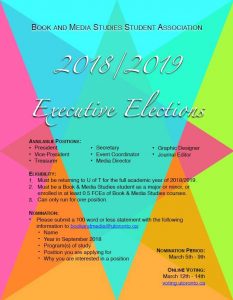 The Book & Media Studies Student Association (BMSSA) 2018/2019 Elections are upon us! If you’re interested in joining BMSSA, please consider applying. The available positions are:

Please submit a 100 word or less statement with the following information to bookandmedia@utoronto.ca:
Follow our event page for updates here.

If you have any questions or concerns, please email the BMSSA team at bookandmedia@utoronto.ca.

Letter of Support to the University of St. Michael’s College Faculty

We have been made aware that the University of Toronto Faculty Association’s faculty and librarians at the U.S.M.C. have been negotiating for a fair, justified renewal of their collective agreement since Spring 2017. From then until the present, there have been no successful advancements made, and the B.M.S.S.A. Executive are concerned by the prospect of a strike from the rejected proposals. We firmly stand with the faculty and librarians of the U.S.M.C., and urge the administration to negotiate a fair collective agreement.

In particular, the rejection of an equitable statement consistent with the University of Toronto on the U.S.M.C. employment listings as well as equity training concerns us deeply. Book & Media Studies students, as well as other groups within the U.S.M.C. represent a diverse range of racial identities, gender identities, sexual orientations, and religious faiths. The B.M.S.S.A. believes that everyone, regardless of their identity, must receive the same right to feel welcome at the U.S.M.C. We believe that the administration has not made this explicitly clear, and is not committing to equity and diversity in the workplace and in the college itself.

Additionally, the rejection of proper job security and fair compensation for the U.S.M.C. faculty and librarians is another area of concern. These faculty members deserve to be secure and comfortable in their positions, while also being treated equitably and with fairness.

We strongly urge the U.S.M.C. administration to negotiate a fair collective agreement in order to avoid a strike. This situation is incredibly troubling for the students, faculty, and the librarians of this college. 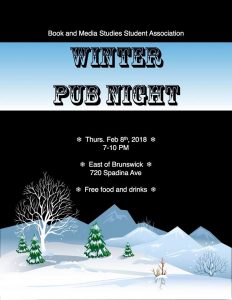 BMSSA is hosting its Winter Pub Night on Thursday, February 8 from 7:00-10:00 pm at the East of Brunswick (720 Spadina Ave.). Join us for free drinks and food; stay for the conversations on all things BMS and pop culture-related!

CALL FOR SUBMISSIONS – The Foolscap Vol. 5

Submissions to the 5th Volume of The Foolscap, Book & Media Studies’ academic journal, are now open! Please send your work to foolscap2018@gmail.com by February 19, 2018.

Please refer to our Facebook event for submission guidelines and details here.

The BMSSA team would like to wish all Book & Media Studies student the best of luck with final exams and assignments. Congratulations on all your accomplishments for this term!

Over the Winter Break, be sure to get some rest, catch up with loved ones, and we wish you all the best for 2018! The BMSSA team will see you in January, with some awesome programming coming your way. Happy Holidays and have a Happy New Year!